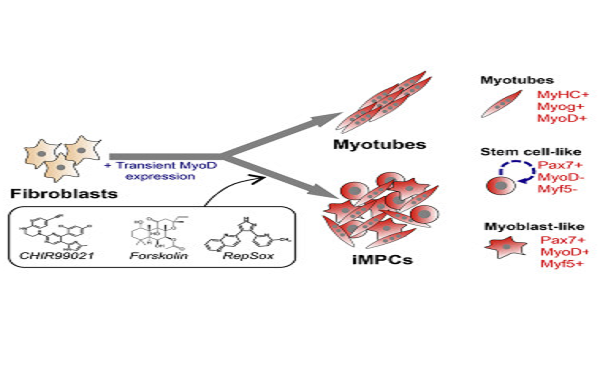 There are differentiated myofibers with many nuclei making up the skeletal muscle that undergo contraction to cause movement. There are also satellite cells: between the basal lamina and sarcolemma that are considered the stem cells of the muscle. They are quiescent under normal/healthy states; upon damage, they form progenitors that not only repair the damaged tissue but also replenish the satellite cell niche.

Whenever there is an injury to the skeletal muscle, there is a pattern of de-adhesion of cells that later undergo rebuilding to restore the muscle. This regeneration also involves the role of macrophages that secrete appropriate factors along with the myogenic cells.

Another cell type is the connective tissue of the muscle-the fibroblasts. These cells form scar tissue in areas where muscles have not been repaired or due to ageing. However, when fibroblasts were partially removed by genetics in mice, the regeneration of the muscles was poor. Thus, the process of muscle restoration also involves the role of these fibroblasts.

Research in the Journal of Cell Science by Agley and team in 2013 showed that cells isolated from digesting healthy muscle of donors were mainly myogenic cells and fibroblast. Exposure of these cells to fatty acids or adipocyte-inducing medium resulted in only the fibroblasts forming adipocytes. This becomes significant given that several conditions such as type-2 diabetes, obesity and muscular dystrophies involve the increase in adipocytes in the muscles. This opens up the avenue of using muscle fibroblasts in research to explore the treatment of such conditions.

2017-published research in The Journal of physiology examined the role of fibroblasts using injured human muscle tissue. As expected the levels of satellite cells increased during the initial days of muscle regeneration. Additionally, an interesting observation emerged with the levels of fibroblasts also increasing at days 7 and 30-to up to 4 times control levels. When human muscle‐derived fibroblast and myoblasts were cultured together, the fibroblasts were found to stimulate the process of muscle repair. Thus, muscle repair also involves the role of fibroblasts showing the importance of analyzing these cells in detail in the future.

Muscle fibroblasts of mice were reprogrammed into iMPCs in Stem Cells reports in 2018; these cells formed myotubes and expressed muscle markers and also showed contractions to be used in or tissue engineering.